How does Oracle licensing cause issues for organizations? In part two we look at: tracking usage, indirect access, virtualization and the OSW report.

Being able to track the usage of your installed software is vital in ensuring that you remain compliant. From accurately knowing the number of Named users who are actually using the software, through to correctly measuring the right metrics, you need to be aware of what is going on across your entire IT estate.

Having access to this type of detailed information will enable you to show Oracle, at the time of an audit, that you know how their software is being used by your organization and be able to defend against the ‘false positives’ that auditing scripts can sometimes produce. With Oracle consistently one of the top vendors most likely to audit, this information offers a host of benefits.

A further benefit of this information, is that you will be able to see which Named users are actually using the software, and if they are not, (say for example if they have left or changed roles) you will be able to recycle their license for use by somebody else. This license re-harvesting can help save you money going forward by not needing to buy as many licenses.

One area where many organizations are increasingly finding themselves non-compliant is indirect access. In respect of Oracle licensing, indirect access is with where a non-Oracle application accesses an Oracle database or data, typically through a single user account.

In many cases, these users will need a valid Named user license to ensure the company remains compliant. You need to be able to identify and manage any instances of indirect access to help prevent potential problems at the time of a true-up/audit. The alternative could result in non-compliance leading to large pay-out for the required licensing.

Virtualization offers a great way to cut costs but is fraught with potential Oracle software licensing issues that could incur expense greater than the original savings. This is due to Oracle’s very tight definition as to what it recognizes as virtualization.

Oracle focus on partitioning and state that there are “…several hardware and software virtualization technologies available that deliver partitioning…” In the world according to Oracle there are two types of partitioning – hard and soft.

Soft partitioning divides the OS using OS resource managers. Oracle explicitly states that “…soft partitioning…is not permitted as a means to determine or limit the number of software licenses required for any given server or cluster of servers.”

What does this mean exactly? Well, if you implemented, say VMware, on a cluster and you run Oracle on any machine in that cluster, you will need to license every single machine in the cluster – not just the server it is installed on.

As you can imagine, this will be pretty expensive and quickly eradicate the virtualization savings. We have come across many sites who have made just this mistake and usually it is only picked up during an audit leading to a large true-up costs and typically fines.

Hard partitioning is where a single server is separated physically into “distinct” smaller systems acting as a physical, independent and self-contained servers.

Oracle has specifically identified and approved a number of these technologies that it recognizes for licensing purposes:

Oracle VM Server can also be used, but the rules for this are precise and complex and should be investigated thoroughly before implementation.

Bearing all these facts in mind, it is no wonder that virtualization is one of the key reasons organizations using Oracle become non-compliant.

The Oracle Server Worksheet (OSW) is the report the organization has to pull together that details:

The OSW is then sent to Oracle LMS who will compare it against the licenses you have bought to see if there is any shortfall.

Obviously creating the OSW can be a time-consuming and complex task depending on how you create it and that state of your Oracle software installations. But, you need accurate and up-to-date data to ensure you are not in a weak position when you come to negotiate with LMS about any claimed shortfall in licenses.

One way this process can be accelerated is to utilize an automated tool that can discover and inventory all your Oracle software as well as monitoring and reporting on all its usage over a 12 month period.

Certero is perfectly positioned to support organizations in order to overcome Oracle licensing issues. Get in touch to take that step.

Four gotchas you need to avoid in 2020 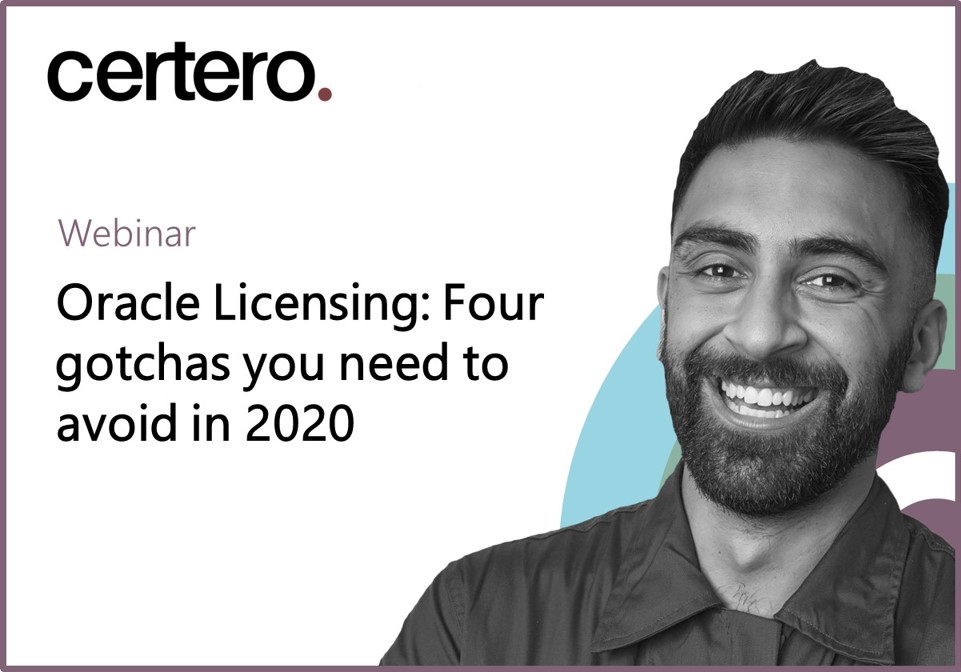 Oracle licensing is notoriously complex and catches many customers out every year, potentially adding millions to their already substantial expenditure.

Our experts will show you to how get visibility of all Oracle consumption, to manage false positives and offer advice for what to do in an audit.

Want to discuss your Oracle challenges with our specialists?

Chat With An Expert
This website uses cookies to help to customise your interactions with us and provide you with a better browsing experience and targeted personization such as (NextRoll). AcceptDecline